Cheers ! And welcome to my blog where today I am toasting the release of my latest Regency novel with a well known historical beverage.

Versions of  syllabub have been around for centuries and I have been experimenting with the basic ingredients to share a glass (or two ) at the launch of Captain Rockford’s Reckoning.

Heading into the nineteenth century, syllabub evolved into a light, creamy lemon concoction which was often served at Regency tables alongside trifles and blancmanges. This was a favourite dish of Esmie Elstone whilst enduring her tedious season in London Society.  More about her later.

Even now, syllabub is still a popular desert, and there are many versions of the original concept, concocted by today’s celebrity chefs.

Here is my, simple, version of the old fashioned alcoholic beverage  Traditionally a sweet white wine or sack  would have been used – but use whatever wine you prefer. I haven’t tried it with cider, but have been told it works just as well. For a non-alcoholic version you could use fruit juice.

First pour your chosen wine into glasses, add a teaspoonful of caster sugar to each one and stir until dissolved. (You might not need this step if you have a very sweet wine.)

Combine a further  100 ml of wine with the juice and  grated zest of a lemon.  Add about 50g of caster sugar.  Pour in half a pint (300 ml) of double cream and using an electric whisk, combine all all the ingredients until you have a  light creamy mixture. Taste and add more sugar if desired.  Be careful not to over whisk. The mixture should be thick and light enough to  form a layer over the wine, without sinking. 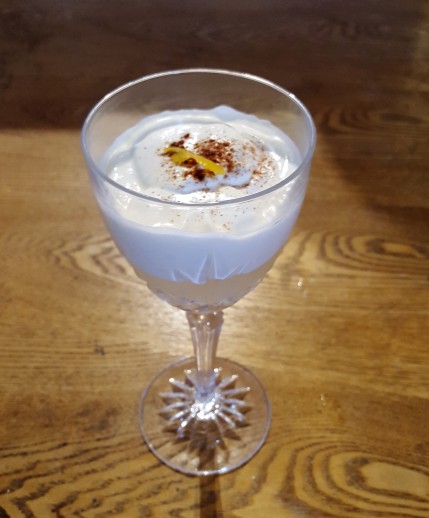 Carefully spoon the topping  on to the wine. The two layers should remain separate. But if  the worse happens and they don’t – it still tastes great. Decorate  with a small piece of lemon peel and a  good sprinkling of cinnamon (or grated nutmeg).

And if you prefer the later version of syllabub as a creamy desert, and not a drink,  just follow the same steps  for the topping,  but use a little extra cream and whisk a little longer for a firmer  consistency.  Spoon the mixture into small bowls or  layer with fruit.  Really, you can adapt to what you like.

Then sit down and enjoy with a good historical tale.

Talking of which, here is a taste of Captain Rockford’s  Reckoning.

Esmie Elstone is thrown into panic when she hears of Captain Rockford’s return. But she is determined that the days of him interfering with her life are over. Destroying her chances of a happy future on his last visit, had resulted in her being foisted on her Aunt for a third pointless season in London.
To alleviate the boredom of society life, Esmie helps run a discreet betting enterprise under the guise of a sewing club. But there are some things you just shouldn’t wager on, and Esmie’s integrity is soon put to a dangerous test.

Richard Rockford had known Esmie almost all her life. As neighbours, Admiral Elstone had depended on Richard to keep an eye on his daughter when he was away at sea. The responsibility he had always taken on willingly. But her cruel and thoughtless actions, from the day he had left four years ago, had shaken him. Now he was back and wanting answers.

But when Esmie tumbles into a treacherous conspiracy, can he really turn his back on her?

Captain Rockford’s  Reckoning is available for Kindle, KU and paperback  at

6 thoughts on “Cheers! Celebrating the launch of Captain Rockford’s Reckoning.”